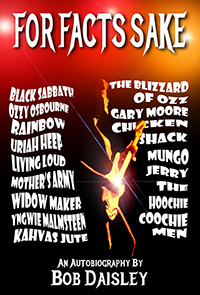 As it’s Halloween, we thought we’d share a story of things going bump in the night at Monnow Valley. This happened back in the winter of 1979 when Ozzy Osbourne, guitarist Randy Rhoads, bassist Bob Daisley and their drum tech Spencer decamped to the house (then still part of Rockfield Studios and known as The Old Mill) for the first writing sessions for Blizzard of Ozz. The pentagrams & associated devil-worship symbols Ozzy drew on our walls during his many visits are still there – but are now covered over with soundproofing!

The following is an extract from Bob Daisley’s Autobiography ‘For Fact’s Sake’ – to order a copy, please visit http://www.bobdaisley.com/for-facts-sake/order-now

One night Ozzy, Randy, Spencer & I decided to have a seance with a Ouija board. After a while of asking questions and getting Y-E-S and N-O answers, the glass moved and spelled out V-E-R-N-I-N-O. Then it spelled out R-A-N-D-Y followed by Y-O-U A-R-E G-O-I-N-G T-O D-I-E. We didn’t like the vibe and stopped at that point. We were all freaked out, so we broke the glass, threw the paper letters of the alphabet into the fire and poured salt on the table. I tried to take some of the scare out of it and lighten things up by laughing and saying “See Rand? You’d better give up smoking mate!” The name Vernino wasn’t familiar to any of us and obviously sounded Italian. A bit later in the week, during conversation with the owner of Rockfield Studios, we learned that the house where we were staying had been a prisoner-of-war camp during the Second World War for… Italian prisoners!

Spencer was convinced that the house at Rockfield was haunted after the window in his room had spontaneously broken and the glass had blown outwards; ‘Vernino’ and the seance hadn’t done him any favours either. Before our outing to the pub one night, Ozzy decided to give Spencer a fright. He placed a speaker under Spencer’s bed so that he could call his name in a ghostly voice with a microphone. Then he threaded a fishhook through the sheet and attached it to fine fishing line, so that when Spencer heard the ghostly call, the bedclothes would suddenly fly off him. All that night up at the pub during our drinking, clowning and thinking of band names, Ozzy kept saying that he wanted to call the band Hook Sheet, which brought a grin to the faces of Randy, me and Ozzy but a blank, puzzled “what are they on?” look from Spencer. Back at the house when Ozzy did his hook-sheet prank, Spencer turned whiter than his sheets, which he almost turned brown.